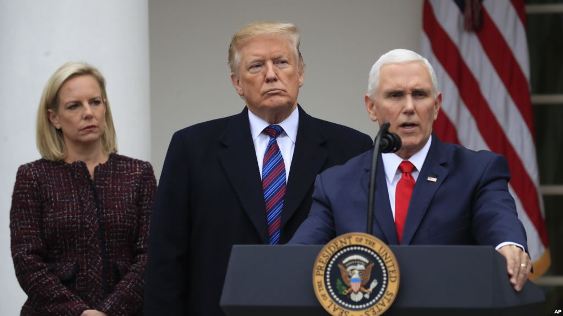 WASHINGTON — The Trump administration is pushing hard to portray the southern border with Mexico as an imminent “humanitarian and national security crisis” to win support for border wall funding in a fight with lawmakers that has brought the country to a 17-day partial government shutdown.

Vice President Mike Pence, in a briefing to reporters Monday, stressed that there is a “bona fide crisis” at the border, and blamed Democrats for “refusing to negotiate” to reopen the government.

Pence was joined by Homeland Security Secretary Kirstjen Nielsen, who said that status quo funding and laws are “not able to address the crisis that we’re seeing at the border.”

Democrats and several immigration advocates have argued the administration’s representation of the issue is inaccurate, and accused them of manufacturing a crisis for the political purpose of building the border wall, which Trump campaigned for as a presidential candidate in 2016.

Trump is scheduled to address the nation Tuesday about what he called the U.S.-Mexico border crisis, before traveling there Thursday.

Pence said the president has invited Democratic leadership to the White House to give their response to the president’s proposal.

Within the past two weeks, Democratic leadership visited the White House twice to negotiate a deal with the president, and failed. They said that weekend negotiations on border security also failed to show progress.

The White House is looking into the legality of declaring a national emergency at the border to begin wall construction without congressional approval. In his briefing, Pence said Trump continues to weigh the idea but has yet to make a decision.

There is no end in sight for the shutdown that has halted a quarter of U.S. government operations since Dec. 22 and forced some 800,000 federal employees to be furloughed or work without pay.

Asked at what point workers’ pain outweighs the president’s desire for a border barrier, Pence said the administration understands the burden faced by government workers but hopes “we don’t find out.”

Responding to Democrats’ request, the Office of Management and Budget (OMB) sent a revised estimate for the proposals for wall funding to the U.S. Senate’s Appropriations Committee.

Along with $5.6 billion for the wall, the administration has called for another $800 million for “urgent humanitarian needs” to take care of migrants at the border.

Tax refunds will be paid

Russell Vought, OMB’s acting director, said tax refunds for Americans will be processed and will be not be considered “non-accepted activities” during the shutdown.

“We are making this as painless as possible, consistent with the law,” he said.

Democrats plan to start passing legislation aimed at funding individual agencies that have been shuttered, in particular the Treasury Department and Internal Revenue Service.

Speaker of the House Nancy Pelosi called it “an action necessary to make sure working families received their tax refunds on schedule.”

Trump has said he opposes a piecemeal approach that does not resolve his demand for a wall.

Semantics may provide negotiating room over the impasse, as Democrats appear more amenable to approving money for “fencing” rather than a “wall” and Trump is now saying he would agree to a steel barrier instead of a concrete wall. On Dec. 21 he tweeted a photograph of a “steel slat barrier” he called “totally effective while at the same time beautiful!”

“If in fact a compromise emerges, it will be over a change in some of the rhetoric,” said Steven Billet, legislative affairs program director at the George Washington University. He added that once “we start talking about border security as an alternative, we may be able to find a way to provide some funding that is satisfactory to the president and House Democrats.”

Speaking to reporters Friday, Trump said, “I think we are probably talking about steel, because I really feel the other side feels better about it, and I can understand what they are saying.”

« US-Backed Forces in Syria Say Five IS Arrested, Five More Deported
No Sign of Compromise on Wall at US-Mexico Border »