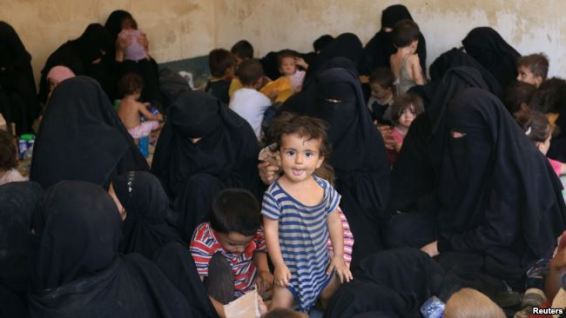 WASHINGTON, QAMISHLI — The U.S.-backed Syrian Democratic Forces (SDF) Monday confirmed the arrest of five Islamic State foreign fighters and the handover of five more to their governments in efforts to rid eastern Syria of the jihadists.

In an interview with VOA, SDF spokesperson Mustafa Bali confirmed the five IS fighters, two Americans, two Pakistanis, and one Irish, were arrested on Dec. 30 during a special operation in eastern Deir el-Zour province.

He said the operation saved dozens of displaced civilians from being targeted.

“Our special anti-terror forces obtained information that IS thugs were planning an attack against civilians who are fleeing the war zone,” Bali told VOA. “We conducted that operation based on the information and arrested five of them who are in our prisons now.”

Spokesperson Bali said an investigation is under way to obtain more details about the men and their activities in eastern Syria, adding that more jihadists could be arrested as the U.S.-backed forces make further advances in the days to come.

The SDF said the arrests are part of their Jazeera Storm operation, supported by the U.S.-led global coalition against IS, to remove the terror group from its last bastions in eastern Syria near the Iraqi border.

“ISIS, which is now cornered in a small area after being cleared from large swathes of territory it once held, is suffering heavy losses due to operations of our forces,” the SDF said in its statement Saturday, using another acronym for IS.

Meanwhile, the SDF said Monday it also handed over five IS fighters, along with 11 wives and 30 children of IS fighters, from Kazakhstan to Kazakh authorities following months of preparation for their transfer.

The SDF did not disclose the identities of the IS fighters and their family members but said the move was part of a formal protocol with Kazakhstani government, meditated by the U.S.

“The reason that made the handing over of those people got late was technical reasons. The agreement was applied on 5 Jan 2019, where they were formally handed over to their country with American mediation,” the SDF said in the statement.

Syrian Kurdish officials last September told VOA they were holding in their prisons 514 IS foreign fighters, along with 534 wives and 1175 children of IS foreign members, from 44 countries. The officials said they were overwhelmed by the burden and asked the relevant countries to retake their nationals.