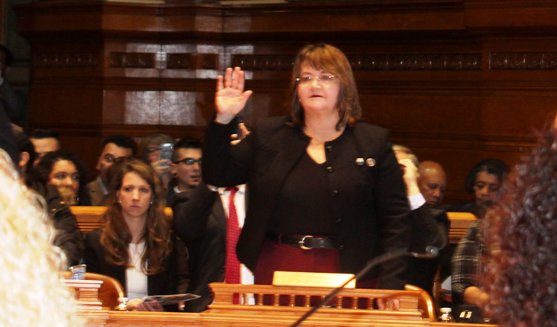 Providence, RI (January 7, 2018) – Providence City Councilwoman Jo-Ann Ryan, Ward Five, was elected by her peers as Majority Leader for the 2019-2023 term. Ryan will be the first woman to hold this senior leadership position.

“I am humbled to have been chosen by my colleagues to serve in this important role,” stated City Council Majority Leader Jo-Ann Ryan. “I plan to work earnestly with every Council member so that we can serve every neighborhood of Providence. There is much to be done to get our economy on track and to move Providence forward, and I have every confidence in my colleagues that we will meet this endeavor head on.”

Ryan continued, “As a senior manager in the financial industry for over 30-years, I have a unique appreciation and understanding of the financial challenges facing the City. During my tenure on the Council, I have taken on many difficult issues: I have worked to reform the Board of Licenses, I have crafted legislation that addressed student housing, illegal ATVs, and worked tirelessly to encourage new business development.”

As a member of the Committee on Finance Ryan worked to hold the line on borrowing, streamlined operations and delivered a balanced budget which resulted in the City re-establishing its rainy-day fund for the first time in almost a decade. During her tenure on the Council, she has also secured more than $6 million in investments to improve Ward Five neighborhood schools, parks, library and opened the Armand E. Batastini Jr. Recreation Center, the first in Ward Five.