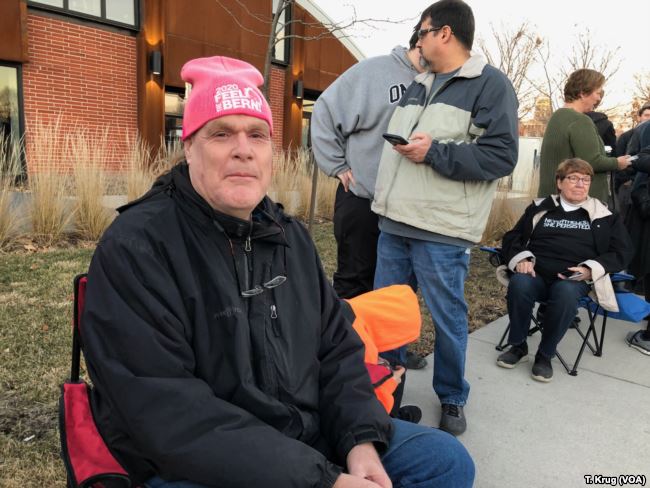 DES MOINES, IOWA — The race to challenge U.S. President Donald Trump in November 2020 kicked off in earnest Saturday, when the first major Democratic Party hopeful to announce her candidacy visited with voters across Iowa.

Bounding onto stage in a packed building in Des Moines’s trendy East Village, Senator Elizabeth Warren of Massachusetts waved to the crowd before speaking in a strained voice. The evening appearance came at the end of a four-city tour across the Midwestern state.

“Nevertheless, I persisted,” she said, referencing both her marathon day and a favorite rallying cry that brought cheers.

In launching her campaign more than a year before both the primary season and the general election, the 69-year-old Warren hopes to gain an edge with Iowa’s roughly 3 million residents before the field of candidates becomes too crowded.

A larger-than-usual deluge of candidates — possibly up to two dozen — are expected to hit the state within the coming year, including an unprecedented number of women and minorities.

Former U.S. Representative and businessman John Delaney announced in mid-2017 and has been actively working to raise his name recognition in the state.

“It’s definitely much sooner this time,” Pat Rynard said of candidates who have already declared their intention to run. Rynard is a former Democratic campaign staffer who runs the political news site Iowa Starting Line.

During the run-up to the 2016 election, for example, the first Republican and Democrat hopefuls formally announced their bids in March and April of 2015.

“I think it’s a reflection of how big the field is, and the fact that there aren’t any front-runners,” Rynard said.

“I think an actual accurate poll would show that well over half of potential caucusgoers are completely undecided,” Rynard said.

That’s certainly the case for Iowans Ed Hotchkin and Ryan Barcus, who stood in line in unusually warm weather to see the senator speak.

Hotchkin, a Des Moines resident who wore a pink 2020 Feel The Bern! hat and voted for Hillary Clinton in the last election, said he was now considering Warren and Sanders. He’ll be attending rallies like this one in order to catch the “nuance” between the two candidates.

Barcus, a school teacher in the Des Moines area, hasn’t made his mind up, but the success of Democrats in the most recent midterm elections has got him energized.

“A lot of people think it’s too early for candidates to be here in Iowa, but I think they need to be here right now. The people of Iowa want to talk to these candidates,” Barcus said.

With its shrinking, but still significant rural base, Iowa and its caucuses mark the start of the multimonth nominating process. Different from a primary, in which voters simply mark a ballot, the process of caucusing gathers voters together in almost 1,700 separate simultaneous meetings across the state to discuss party platform issues.

In the 2020 caucuses, due to pressure from national party leaders, voters should also have the option to submit an absentee vote.

“[Campaigning in Iowa] really helps get the candidates focused and their messages honed down for the general election,” said Troy Price, chairman of the Iowa Democratic Party.

While Iowa is often criticized for being a poor representation of the entire U.S., and for receiving outsized attention as just one in dozens of contests across the country, Price disagreed.

He highlighted the often-overlooked diversity within the predominantly white state, as well as its “good mix of urban and rural areas.” Price also pointed to the fact that Iowa’s smaller population lends itself to “retail politics,” meaning voters get a chance to meet candidates in church basements, coffee shops and school auditoriums.

“When it’s a state like Iowa, folks get a chance to actually get to know the candidates and be vetted in a way that may not be possible in a bigger state,” Price said.

As for whether the state will field any serious Republican challengers to Trump, analysts say it’s unlikely. The president enjoys a very high approval rating among Iowa Republicans, with Iowa Republican Party Chairman Jeff Kaufmann saying in an emailed statement to VOA that rural Americans are “thriving under President Trump’s pro-growth economy.”

He added, “The Republican Party of Iowa welcomes Republicans from across the country to come and visit our state and talk to our grassroots voters, but we are 100 percent behind President Donald Trump and will work tirelessly to re-elect him in 2020.”

While most voters VOA interviewed said they will likely remain undecided for awhile, Rynard anticipates that moderate Democratic candidates won’t fare well. That could be good news for Senator Warren, who some accuse of being too liberal.

“I think Iowa caucusgoers will be going for a candidate who is more progressive than they’ve ever nominated,” he said.

Jill McLain-Meister, who spoke to VOA before Senator Warren’s rally in Des Moines, said the potential choices both overwhelm and excite her. She’s already started talking about the next election with her friends and family.

“Too much, if you ask my father,” she said, laughing.

McLain-Meister, a senior copy editor at a global advertising firm in Des Moines, likes Senator Warren but hasn’t settled on a favorite candidate yet.