House Passes Funds to Re-Open Government, Not for Wall 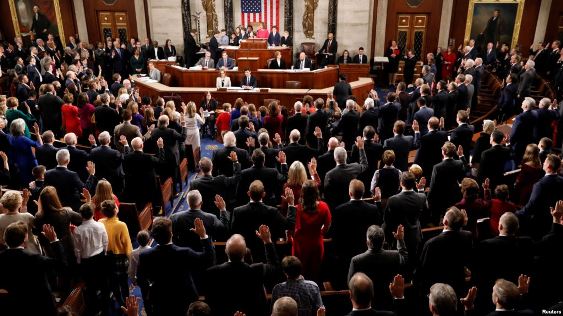 WASHINGTON — U.S. President Donald Trump and congressional leaders are scheduled to meet late Friday morning at the White House to discuss how to end the government shutdown that has entered its third week.The meeting comes a day after a new group of lawmakers was sworn into office in what is now a Democratically led House of Representatives.

Thursday night, the House passed a plan to reopen the federal government.

The measure did not include the $5 billion the president has demanded to build a wall at the U.S. border with Mexico.

“We’re not doing a wall,” Nancy Pelosi, a Democrat, said after she was sworn in Thursday as the new speaker of the House of Representatives. She suggested that the money could better be used for border security technology and hiring more border agents.

The legislation passed in the House Thursday called for the reopening of the federal government and the funding of the Department of Homeland Security until early February.

While Trump himself has not used the word “veto,” other White House officials have. One official said the president told Democratic leaders he would “look foolish” if he ended the shutdown.

Trump is blaming Democrats for the current situation.

“The shutdown is only because of the 2020 presidential election,” he tweeted Thursday. “The Democrats know they can’t win based on all of the achievements of Trump, so they are going all out on the desperately needed wall and border security and presidential harassment. For them, strictly politics.”

Trump said the country needs protection, and warned that crime, drugs and gangs were pouring into the United States from Mexico.

He also claimed there are as many as 35 million illegal immigrants in the United States, contradicting experts who say the number is far lower.

Meanwhile, 800,000 federal workers have been furloughed or are working without pay.

« Ahead of One Year Anniversary of Parkland Tragedy, Rubio, Reed Re-Introduce Bipartisan “Red Flag” Bill
Mexico Demands US Investigate Use of Force Against Migrants »