In New US Congress, Each Party Controls a Chamber 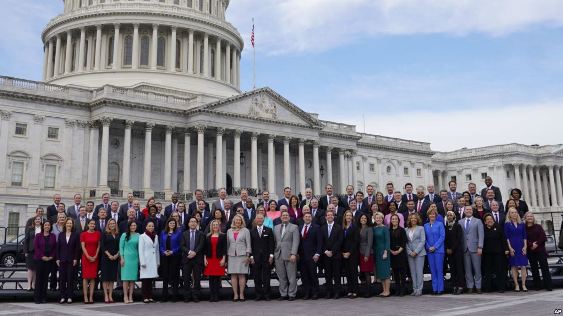 Divided government returns to the United States Thursday with the swearing-in of a new Congress.

After two years in which Republicans controlled the White House, Senate and the House of Representatives, Democrats will be the majority in the House.

That is the result of the November midterm elections in which Democrats made big gains to end up with 235 seats in the 435-seat House when the new members take office. Republicans picked up two seats in the Senate, and now hold a 53-47 majority.

Rep. Nancy Pelosi from California is expected to be voted House speaker, returning her to the post she held from 2007 to 2011. She is the only woman to ever be House speaker, and if elected again would be the first person in more than 60 years to reclaim the job after her party lost and later regained its House majority.

Some Democrats expressed a desire for new leaders to emerge in the party, and Pelosi agreed to serve no more than four years as speaker in return for enough support.

The new Congress is the most diverse in history.

It includes New York’s Alexandria Ocasio-Cortez, the youngest woman ever elected to Congress. There is also Michigan’s Rashida Tlaib and Minnesota’s Ilhan Omar, the first two Muslim women to be elected. And with New Mexico’s Deb Haaland and Sharice Davids from Kansas, for the first time there are two Native American women in Congress. There are also 10 lawmakers who openly identify as LGBTQ.

The new Congress faces the immediate challenge of handling a partial government shutdown. So far there is little sign of the Democratic leaders in the House and the Republican leaders in the Senate agreeing on a spending plan that would reopen the one-quarter of government operations that are currently closed.

Beyond that issue, House Democrats are set to use their new status in control of the chamber’s committees to launch a number of investigations into the actions of the Trump administration, including the president’s income taxes, his decision to fire Attorney General Jeff Sessions, and new inquiries into ties between Trump and Russian President Vladimir Putin.