MONROEVILLE, PENNSYLVANIA — Tricia Cunningham has bet her own money and more than a year of her life on winning Pennsylvania for Donald Trump.

The self-described “super-volunteer” selling T-shirts, signing up volunteers and distributing yard signs out of two rooms in a non-descript office building in the small city of Monroeville is one of the more active elements of Trump’s unorthodox ground game in this key swing state.

The Republican candidate’s unusually late start on a general election campaign already has put him at a disadvantage in the polls, where he trails Democratic candidate Clinton by an average of eight points with a little more than two months to go.

Clinton has run a more traditional, numbers based campaign, raising 30 times more money than Trump in Pennsylvania and building a widespread network of campaign offices across the state.

The Trump campaign — which just hired senior state advisors in July — argues it has the unmeasurable element of voter enthusiasm on its side. 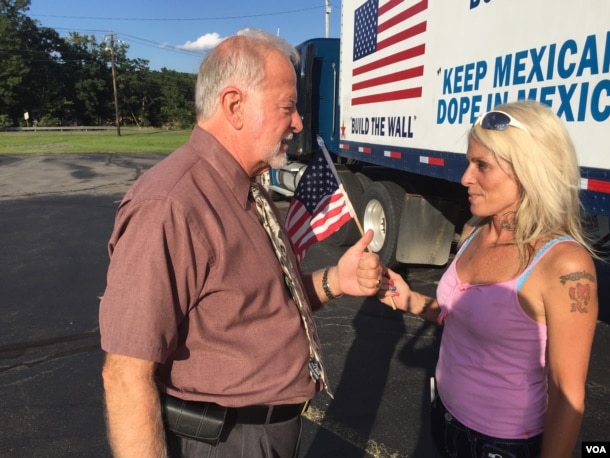 Businessman and Trump supporter Bob Bolus talks to driver Kishan Markarian, who questions whether either candidate is good for the country, in Scranton, Pennsylvania. (A. Pande/VOA)

That sense of excitement on the ground may be true if the pace of Cunningham’s cell phone activity is any marker. She’s switching constantly between two phones on this Wednesday morning in late August, fielding inquiries from across western Pennsylvania, as a steady stream of retirees stops by to pick up yard signs.

The weekends are busier, says Cunningham, a time for neighborhood door knocking and information booths at county fairs.

She’s been with the campaign since the very beginning, agreeing to organize delegates for the South Carolina and Pennsylvania primary contests about 20 minutes after Trump’s June 2015 presidential announcement. But when the Trump team made the unusual decision to shut its Pennsylvania office after winning the primary, Cunningham took the lead, paid out of her own pocket to keep a ground presence going and even went sky diving for the very first time to build publicity about Trump.

Cunningham is not officially affiliated with the campaign. But she works with three relatively new Trump field directors in Pennsylvania and built a catalogue of 8,000 volunteers statewide.

“You tell me that we don’t have a ground team!” she says. “It’s like nails on a chalkboard. We have the most fierce ground game that I have ever seen.”

Clinton campaign chiefs remain confident of winning Pennsylvania based on polls showing overwhelming support among African-Americans in the state’s largest cities and unusually strong support from white suburbanites. But in suburban communities like Monroeville outside Pittsburgh, population 28,000, Trump has stirred a wave of excitement.

“He’s bringing in a whole different, new voter base for the first time,” says D. Raja, chair of the Allegheny County Republican Party. He notes that more than 100,000 people switched party allegiance to vote for Trump this election season.

Raja says the cross-party dynamics have led to a neighborhood based approach to campaigning. While the Clinton campaign employs paid field staff, the Trump campaign relies on volunteers and local organizations like the Allegheny Republican Party to put in place neighborhood leads, who can talk to people they know about Trump’s policies.

John Larkin is one of them. A life-long Democrat who voted for Barack Obama in both of the past elections, the Monroeville resident sits on his porch, recalling the moment Trump announced his candidacy as the turning point in his political beliefs.

“Trump really impressed me,” he says, “I was one of them people — I was bad because I would just vote Democrat because I’m a Democrat. Once you start watching things, you’ll vote for the person you think is best. I think he’s confident and I think he’s strong and I think that’s the type of leader we need other countries to see.”

The community element of that strategy is on full display back in Cunningham’s Monroeville office. Sondra Dull drove in 20 minutes from her home of Herminie, where she has been the town barber for the last 33 years. While Dull has always been a Republican, she sees this election as an opportunity to educate her primarily Democratic community about the issues.

“The men are all voting for Trump,” she says with a smile. “The women are basically on the fence because they don’t like the way he talks and I say, ‘well you need to travel to New York because he’s a New Yorker. That’s how they speak there.’”

She says the loss of businesses and a collapsing infrastructure will lead people to vote for a businessman like Trump who will depart from the political establishment.

Cunningham believes she is on the right track in terms of community outreach. Before heading out to her “Trump truck” covered in 2016 campaign stickers, she smiles wearily and counts out the number of days until the election. She says she would like to get more sleep but the effort has been worthwhile.

“I don’t stop and the biggest reason is because of my five grandkids. I don’t want them to go to school in the future and read in a history book about how great this country was,” she says.