He’s a conservative, an exotic species among his millennial peers. Hartman was one of 120 campus leaders invited to Washington this June for a conference on climate change.

But with Republican leadership – from presidential nominee Donald Trump on down – denying that climate change is a problem, Hartman finds himself at a loss. 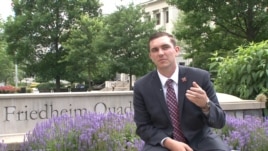 “While I’m unashamedly a conservative, I’m also unashamed to admit that science has proven these things,” he says.

The issue is more important for millennials than for any other generation, and they are the largest age group in the country.

Across the board, it’s getting harder to find people who don’t believe the climate is changing and that humans are at least partly responsible.

But the Republican Party generally takes a dim view of the importance of global warming. Among the party’s most vocal skeptics of climate science are the chairs of the House science committee and the Senate environment committee.

While the Democratic platform devoted one entire section to climate change, the Republican platform made only passing mention of it, mainly to dismiss the subject.
“Climate change is far from this nation’s most pressing national security issue. This is the triumph of extremism over common sense, and Congress must stop it,” one passage reads.

That approach hasn’t hurt the Republicans so far.

“Republicans are focused on the issues that are the most important to the American people,” says Jim Hobart, a Republican pollster at Public Opinion Strategies.

And polls show climate change is not one of them.

“I do think it’s a problem going forward,” he says. “I think the Democrats see it as an opportunity.”

Pushing for change on climate

Opposing action on climate change hurt hypothetical candidates in a recent Yale University and George Mason University survey. Four times as many people said they would vote against these candidates as would vote for them (45 percent to 11 percent).

Faison says the Republican Party risks losing millennials, as well as “suburban women and a lot of the voting groups that we need to win tough general elections. This could be the deciding issue.”

It may not be voters’ top concern, but Faison thinks it could be an issue that peels off voters who would otherwise vote Republican. That can make the difference in a tight race.

That’s why Faison wants the party to change its tune. He put $165 million of his own money into founding ClearPath.

ClearPath’s political action committee is putting up to $5 million into digital ads backing five Republican candidates who support clean energy and “where we have a large percentage of persuadable voters who care about this,” Faisons says. 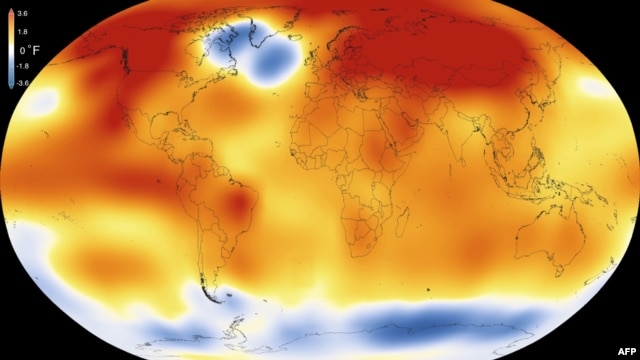 This illustration obtained from NASA on January 20, 2016, shows that 2015 was the warmest year since modern record-keeping began in 1880, according to an analysis by NASA’s Goddard Institute for Space Studies.

Ayotte and Curbelo made headlines late last year when they helped organize congressional groups dedicated to dealing with climate change.

“We have Republican members of Congress standing up and saying [climate change is] real, it’s linked to humans, and we can and must do something. That’s a profound statement,” says John Reuter with the League of Conservation Voters. “But it’s a starting point. It’s a sign of how bad the Republican Party has gotten that that’s significant.”

The candidates ClearPath is backing don’t get strong marks from environmental groups. They received lifetime scores from the League of Conservation Voters ranging from 35 percent to 6 percent.

The Republicans’ positions are making it harder to recruit young voters.

Spencer Hartman, the conservative University of Nebraska student body president, notes, “You haven’t heard me identify myself as Republican.”

He’s not sure who he’ll vote for in the presidential race. “I haven’t found the candidate I’m enthusiastic enough about to vote for yet,” he says.