Turkey intensified its crackdown Sunday on officials who allegedly played a role in the failed coup in mid-July, dismissing nearly 1,400 military personnel.

Among those discharged was a top aide to President Recep Tayyip Erdogan, who also moved to tighten his grip over the top ranks of the country’s armed forces and spy agency.

Erdogan aide-de-camp Ali Yazici was among those arrested five days after the July 15 uprising in an attempt to overthrow Erdogan’s Ankara government.

More than 50,000 Turks have now lost their jobs across the country and more than 18,000 have been detained, all for their alleged connection or support of Fethullah Gulen, a Muslim cleric who has lived in the United States for 17 years that Erdogan has blamed for the coup attempt. Gulen is an Erdogan opponent, but has denied any connection to the upheaval.

Turkey has demanded that the U.S. extradite the 75-year-old Gulen, who lives in a mountain compound in the eastern U.S. state of Pennsylvania. Ankara sent American officials dossiers on Gulen’s purported involvement on the coup, but the U.S. has given no indication it will act soon on the extradition request.

Meanwhile, pro-Erdogan supporters are set to rally in Cologne, Germany on Sunday. Germany is home to about three million people with Turkish roots.

Turkey’s sports minister is expected to attend the demonstration, but German officials banned video messages from Turkey’s leaders from outside Germany.

Clashes during the short-lived coup bid killed more than 235 people and wounded nearly 10 times that many, but the major impact of the attempt to remove Erdogan has been the wave of detentions, firings and suspensions 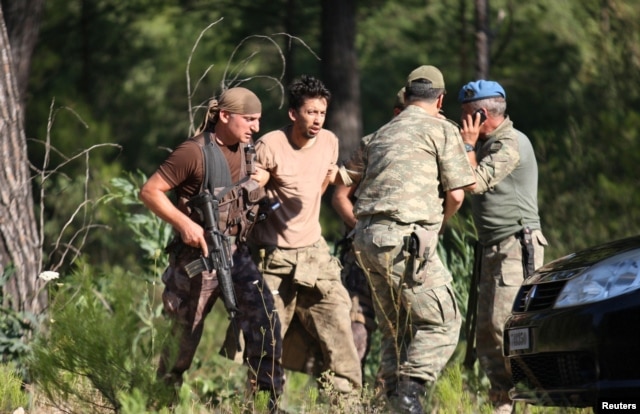 Turkey’s Western allies condemned the coup as soon as it occurred, and have restated their support for Erdogan repeatedly since then. However, as the purges expanded, the allies also have become concerned about the scale of the crackdown.

Erdogan has responded sharply to any perceived criticism from abroad this month. Speaking from his presidential palace Friday evening, he accused the West of deserting Turkey in its hour of need: “Some people give us advice; they say they are worried. Mind your own business! Look at your own deeds!”

Erdogan indicated some of his future plans in a wide-ranging interview Saturday with the private Turkish news channel A-Haber. He announced parliament would soon receive “a small constitutional package” that would bring the country’s National Intelligence Organization and the chief of staff of the armed forces under the president’s direct control.