The jihadist group Islamic State has released a video showing the two men accused of killing a Catholic priest at a church in northwestern France holding an IS banner and pledging allegiance to IS leader Abu Bakr al-Baghdadi.

The video was posted by a news agency associated with Islamic State. In it, one of the men is reciting in Arabic a traditional pledge of allegiance to Baghdadi.

Earlier Wednesday, French President Francois Hollande met with religious leaders in an attempt to assuage fears after this latest in a string of terror attacks in France.

Hollande gathered leaders of various religions at his office in Paris in an attempt to create interfaith solidarity.

Many in the French Catholic community were still in shock after Tuesday’s attack in which a 19-year-old jihadist, already awaiting trial on previous terror charges, burst into a church with an unidentified accomplice and slit the throat of an 86-year-old priest while he was conducting Mass. 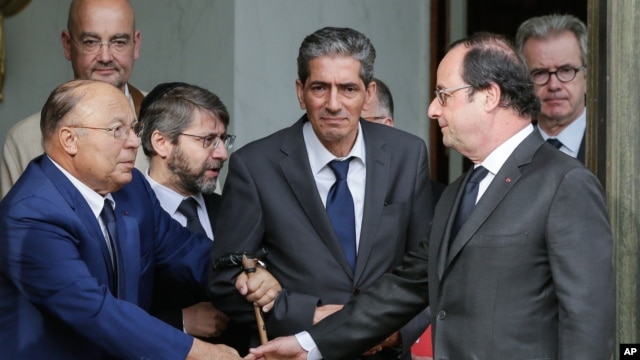 Adel Kermiche had been arrested twice on terror-related charges since March 2015, and was wearing an electronic bracelet at the time he carried out the attack.

Both attackers were killed when they charged at police, and police opened fire on them.

‘Where were the police?’

Mohammed Karabila, leader of the regional council of Muslim worship in the area, had just two questions following the attack: “How could a person wearing an electronic bracelet carry out an attack? Where were the police?”

Others in the Muslim community called for increased security at religious buildings, but cautioned against lumping the terrorists with the rest of France’s Muslim community — the largest in Europe.

“We deeply desire that our places of worship are the subject of greater [security] focus, a sustained focus,” said Dalil Boubakeur, the head of France’s Muslim community.

He went on to express “deep grief” on behalf of French Muslims, and called the attack a “blasphemous sacrilege which goes against all the teachings of our religion.”

Pope Francis condemned the attack on a Roman Catholic church. Through Vatican spokesman Reverend Federico Lombardi, the pope said the attack is particularly difficult to understand “because this horrific violence took place in a church, a sacred place in which the love of God is announced.” 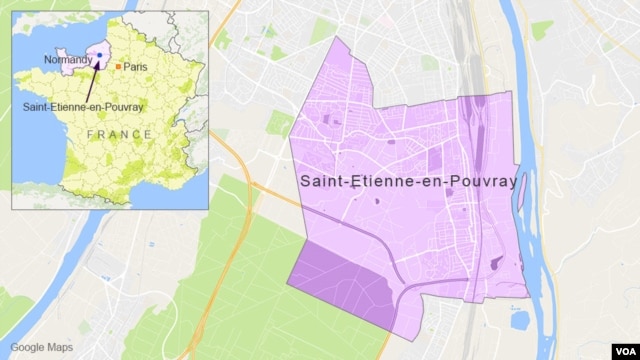 French Prime Minister Manuel Valls also warned against vilifying all Muslims after the attack, saying the goal of the terrorists is to “set the French people against each other, attack religion in order to start a war of religions.”

In January 2015, there were deadly assaults on the offices of satirical weekly Charlie Hebdo and other public places around Paris, killing 17 people.

In the southern city of Nice, 84 people were killed on July 14 by a man who drove a truck through a crowd celebrating Bastille Day while firing a handgun