Negotiators meeting for Syrian peace talks that began Friday in Geneva are focusing on urgent goals: establishing a cease-fire, delivering humanitarian aid, and setting a course for long-term resolution of the nearly five-year conflict.

They’re also confronting a crisis years in the making, rife with deep sectarian divisions, clashing regional and international interests, and a rising threat from the radical Islamic State militant group that has exploited Syria’s instability.

What sparked the crisis?

In March 2011, a popular uprising began against Syrian President Bashar al-Assad’s authoritarian regime after the arrest, and alleged torture, of more than a dozen youngsters in the southern city of Daraa. They’d scribbled anti-government slogans on a wall. Protesters took to the streets, demanding the youngsters’ release – as well as sweeping political reforms.

The government made some concessions – repealing a restrictive emergency law, for instance – but also responded with a bloody military crackdown, initially killing four demonstrators. Unrest spread from that flashpoint city, along with demands for Assad’s resignation. Rebel groups took up arms.

Since then, the conflict has left more than 250,000 people dead in Syria and displaced as many as 11 million others from a prewar population of about 22 million. Of those, at least 4 million have fled to neighboring countries. Tens of thousands have risked harrowing journeys to seek refuge in Europe, fueling a migrant crisis there. 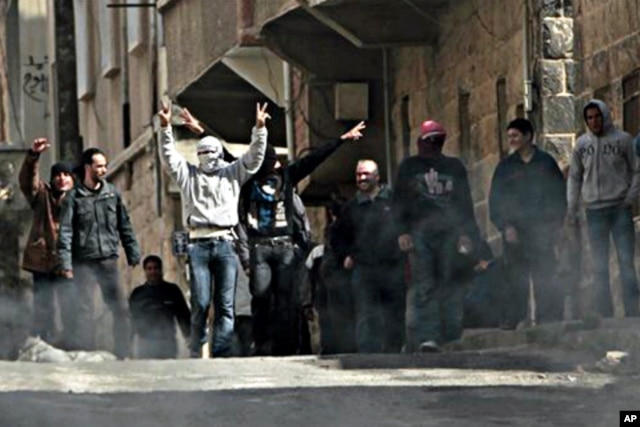 FILE – Anti-Syrian government demonstrators take to the streets in the southern city of Daraa, March 23, 2011.

Who’s involved in the conflict?

There are multiple players and multiple spheres – local, regional and international. (The Financial Times news site sorts them out, along with their complicated allegiances, in graphic form.)

The opposition in Syria includes many Sunni Islamist rebel groups as well as secular ones. They include Kurds, the largest ethnic minority in the predominantly Arab country. The main Sunni and Kurdish groups collaborate in fighting not only the Assad regime but also IS militants. The opposition has the backing of the West, including the United States and the European Union.

Syria historically has been a bastion of religious tolerance in the Middle East, with Muslim sects, Christians and Jews living in close proximity, the On Faith website points out in examining faith’s role in the conflict.

What are some of the key developments?

Initially, in late April 2011, the Obama administration imposed sanctions on Syria’s intelligence agency and two of Assad’s relatives – and pressed for European allies to use their greater influence to halt the bloodshed. That August, Obama called for Assad’s resignation.