Speaking to reporters in Ankara after an emergency security meeting, Turkish Deputy Prime Minister Numan Kurtulmus said that the suspected suicide bomber had been identified as a Syrian national born in 1988, and his possible links with Islamic State were being investigated.

Kurtulmus said that most of the people killed were foreigners. He expressed condolences for those who lost their lives and said that Turkish officials will visit the wounded at hospitals immediately after arriving in Istanbul.

“We express our condolences to those who lost their lives. Unfortunately most of them are foreigners. Fifteen people are wounded and two of them are in critical condition,” Kurtulmus said. “We will visit them at hospital first thing after flying to Istanbul and we will have a briefing at Istanbul governor’s office afterwards. It has been identified that this suicide bomber is a Syrian national born in 1988 and the necessary work is underway.” 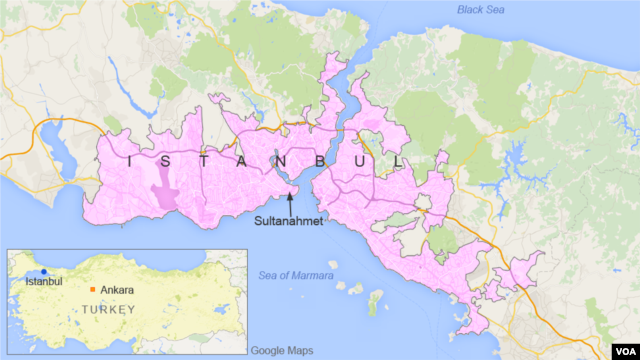 Witness Ali Hakan Ataman said it was a big explosion.  “I was in a shock for a while right after it happened.  Blood and flesh were spattered on us and I am sure I saw six or seven people laying on the ground dead…” he said.

Another witness, Erdogan Salihli, said people went briefly silent right after the blast.  “As people were trying to figure out what really happened the cries of people at the scene was very tragic,” he said.