Mexico Moves to Extradite Drug Lord ‘El Chapo’ to US

Mexico is starting the process to extradite the notorious Mexican drug lord Joaquin “El Chapo” Guzman to the United  States, where he faces an array of charges linked to the hundreds of tons of cocaine, heroin and other drugs he has shipped across the border.

The Mexican government had in the past rejected U.S. requests to turn over Guzman, but changed its stance after the drug kingpin escaped six months ago from one of its prisons for a second time before being recaptured in a shootout with authorities last Friday.  Interpol agents in Mexico went Sunday to the prison near Mexico City where he is being held to deliver two extradition warrants.

The legal process to send Guzman to the United States could take months, but Mexican authorities are looking to move quickly, as Guzman’s attorneys have vowed to oppose their extradition effort.

Guzman faces money laundering, drug trafficking, kidnapping and murder charges in the United States.  He could be sent to one of several U.S. cities for trial, including New York or Chicago, where authorities have called him “Public Enemy No. 1”, the first time the city has used the designation since it described crime boss Al Capone the same way at the height of the Prohibition fight against the sale of alcohol in the 1930s.

Even as Mexican authorities locked up Guzman at the same prison he escaped from in July, they are looking to question U.S. actor Sean Penn, who interviewed the drug lord in October for a story posted on Rolling Stone magazine’s web site on Saturday, and Mexican actress Kate del Castillo, who helped arrange Penn’s discussions with Guzman. 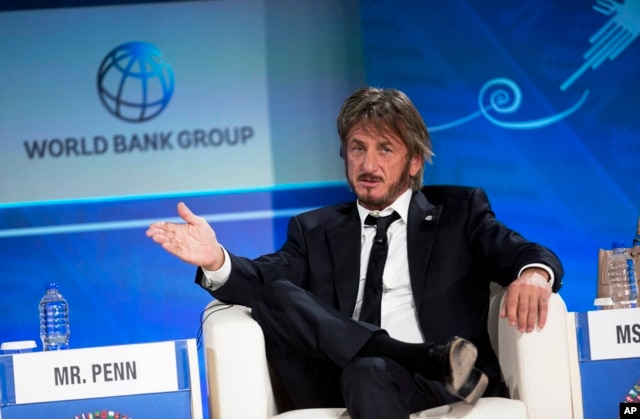 Mexican authorities say they found out about Penn’s seven-hour meeting with Guzman, which eventually helped them track down the Sinaloa drug chief. Penn’s interview with Guzman sparked criticism in the United States, with one Republican presidential candidate, Florida Senator Marco Rubio, calling it “grotesque.”

Journalists questioned Penn’s agreement to allow Guzman the right to review the article before it was published.

In the interview, Guzman boasted, “I supply more heroin, methamphetamine, cocaine and marijuana than anybody else in the world.  I have a fleet of submarines, airplanes, trucks and boats.”  Penn described Guzman as “entirely unapologetic.”

“If there was not consumption, there would be no sales,” Guzman says about his drug trafficking.  “It is true that consumption, day after day, becomes bigger and bigger.  So it sells and sells.”

Guzman’s July 11 prison escape, his second in the past 14 years, was accomplished through a 1.5-kilometer underground tunnel, dug in secret from his cell to a nearby village.

Guzman’s escape was a major embarrassment for the administration of President Enrique Pena Nieto, which had been praised for its aggressive push against Mexico’s top drug traffickers.

Penn says Guzman sent his engineers to Germany last year “for three months of extensive additional training necessary to deal with the low-lying water table beneath the prison.”  He says once Guzman descended into the tunnel he was able to drive off in “a pipe-track-guided motorcycle with an engine modified to function in the minimally oxygenized space.”

Penn made plans for the interview at the same time he was staying in the same New York hotel as the Mexican president.  Penn says one person from the Mexican president’s detail asked him for a selfie as the actor walked down a street “lined with the armored SUVs that will transport the president of Mexico to the (United Nations) General Assembly.” 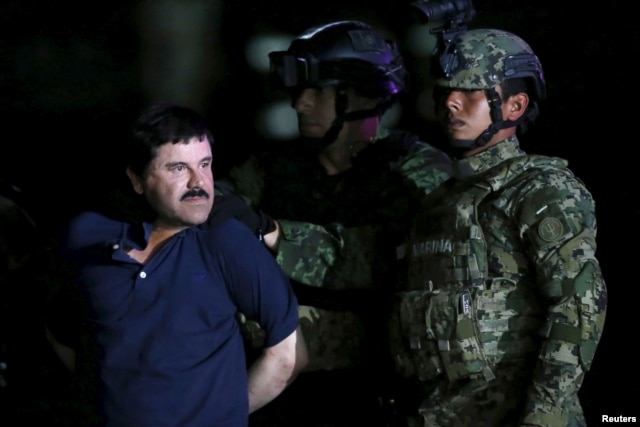 Joaquin ‘El Chapo’ Guzman is escorted by soldiers during a presentation at the hangar belonging to the office of the Attorney General in Mexico City, Mexico, Jan. 8, 2016.

Guzman’s escape in July from a maximum security prison was a point of friction between Mexico and the United States, which had requested his extradition.

The drug lord was returned to the Altiplano Prison after being recaptured Friday in the city of Los Mochis, which is in Guzman’s home state of Sinaloa.

Hours later he was shown to reporters, dressed in a blue shirt and track pants, being transferred from an armored van to a helicopter that was to take him and at least one accomplice back to prison.

The Mexican marines, acting on a tip, raided a home in Los Mochis just before dawn Friday.

A gun battle ensued that left five suspects dead and one marine wounded.  During the fighting, El Chapo and one of his top lieutenants escaped through the sewers, but were later captured by marines.

Mexican federal authorities had been focusing their manhunt since October on a mountainous region of Sinaloa, in northwestern Mexico.  Tracking teams reported it appeared that Guzman had been injured while fleeing marines in rugged terrain near the borders of Sinaloa and Durango states.

Guzman was first captured in 1993, but escaped in 2001 with the help of prison guards.  After more than a decade on the loose, he was recaptured early in 2014, with the help of intelligence that U.S. authorities provided to Mexico.

Mexico has issued arrest warrants for more than 20 former officials, guards and police officers for their alleged participation in Guzman’s escape last year.  Ten civilians are also in detention.