Suspect Arrested after Philadelphia Policeman Shot in Name of IS

A gunman claiming to have pledged allegiance to the Islamic State terror group ambushed a police officer Thursday as he sat in his marked car in Philadelphia, Pennsylvania, firing multiple times at the officer.

According to authorities, the officer, who was struck three times in the left arm, managed to fire back and hit the 30-year-old assailant, who ran off but was later apprehended.

The stricken police officer is identified as 33-year-old Jesse Hartnett. He is expected to survive but will require multiple surgeries, police said Friday.

There was no immediate word on the suspect’s condition, although it is being reported that he was struck in the buttock. 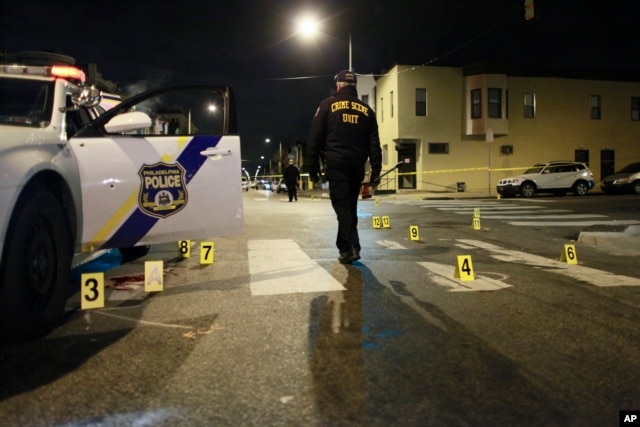 An investigator walks through the scene of a shooting, Jan. 8, 2016, in Philadelphia.

Still-frame pictures broadcast on national television Friday showed the suspect approaching Hartnett’s car at an intersection, going directly up to the officer’s window, and a short time later running away. Authorities say the weapon the suspect used had been stolen from an officer’s home in 2013, but not by the attacker himself.

Police commissioner Richard Ross said the attack was unprovoked and that it is one of the scariest things he has seen.

Ross told reporters he cannot believe that Hartnett — who has been on the force for five years — was able to survive.

U.S. authorities have been on high alert following Islamic State-linked attacks in recent months in Paris, France, and San Bernardino, California. Authorities say the suspect in the Thursday shooting claimed to have carried out the incident in the name of the Islamic State and that he “follows Allah.”