PARIS—Belgian police revealed Friday they found the fingerprint of a fugitive suspect linked to the November 13 Paris terror attacks along with suicide belts and explosives during the search of a Brussels apartment.

Federal prosecutors in Belgium said police discovered the items during  December 2015 raid. Salah Abdeslam, whose fingerprint was found inside the apartment is believed to have played a key logistical role in the November attacks. His brother, Brahim, was among the suicide bombers who died in the shooting and bombing attacks around Paris that killed and injured nearly 500 people.

Belgian police said they found what they believe to be three handmade suicide belts, along with traces of TATP, a highly volatile material that was packed into the suicide vests of the Paris bombers.

A spokesman for the prosecutor’s office said it was not clear when Abdeslam had visited the apartment and did not explain why officials waited a month to announce the discovery. In a statement, the prosecutor’s office said the apartment, which was searched December 10, had been rented under a false identity and may have been used by one of 10 people arrested in Belgium in connection with the Paris attacks. Prosecutors say Abdeslam may have hidden inside the apartment after the attacks, or the flat may have been used as a place to make explosive devices.

Terrorism analyst Claude Moniquet told French TV that the findings confirmed what experts have concluded; that the Islamist attacks were prepared and planned in Brussels, although they were likely organized in Syria. The Islamic State militant group has claimed responsibility for them.

Investigators lost track of the Brussels-born Abdeslam after he crossed the French border into Belgium shortly after the attacks. Two friends in the car that dropped him off in Brussels have been arrested. 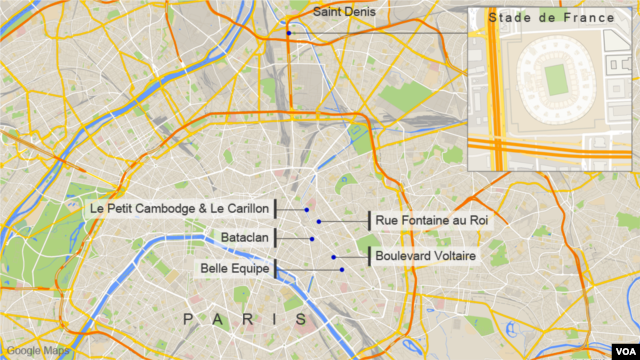 Sites of the November attacks in Paris

Expert Moniquet says Abdeslam could be in Syria – but he could also be hiding with colleagues somewhere in Europe, planning another attack.

The findings were announced as France marks the first anniversary of the first set of attacks here – targeting the Charlie Hebdo weekly and a Kosher supermarket. On Thursday, police shot dead a man trying to attack a Paris police station who carried a note with the Islamic State flag.

During a speech Thursday marking the anniversary, French President Francois Hollande announced that police officers will now be allowed to keep their weapons off duty, and he pledged to boost armed security forces by 5,000 officers.

Marissa Melton contributed to this story in Washington.