Congressman: US-led Airstrikes Have ‘Minimal Impact’ on IS

Republican U.S. Congressman Peter King (NY) said that while the U.S.-led airstrikes against the Islamic State group in Syria and Iraq have had some impact, it has been minimal given how long the air campaign has gone on. King’s remarks Sunday on U.S. television followed a purported audio recording by IS leader Abu Bakr al-Baghdadi who said U.S. coalition and Russian strikes have failed to weaken the IS group.

King, chairman of the House Subcommittee on Counterterrorism and Intelligence, said Baghdadi’s statement about the 16-month U.S.-led campaign, and the three-month Russian effort, is not surprising.

“We’ve had some impact.  But, unfortunately, overall, he’s probably right that after 16 months of air attacks by the US it’s had minimal impact on ISIS considering how long those attacks have been going on.  As far as the Russians, they’re focusing most of their attacks on the Syrian resistance as opposed to ISIS.  So, ISIS is strong.  ISIS is stronger, I believe, than it was 16 months ago.  They certainly have a larger land mass under their control, not just in Iraq and Syria are they significant, but they’re making great inroads in Afghanistan and, as we know, they do intend to attack the United States,” said King.

King said that in the last several months it has become clear that the IS group intends to launch an attack on the U.S.

In an audio statement that purportedly comes from the reclusive IS leader, Baghdadi sounded defiant in the face of recent battlefield setbacks.

The IS leader is quoted as saying: “God will grant victory… our state is doing well.  The more intense the war against it, the purer it becomes and the tougher it gets.”

He goes on to say that “everyone who participates in the war against Islamic State will pay the price and regret it.”

The Syrian Democratic Forces (SDF), a rebel alliance including U.S.-backed Kurdish militia known as the People’s Protection Units (YPG), are consolidating their hold over the strategic Tishrin Dam in northern Syria east of Aleppo, which they just wrested from IS control.  At the same time, Iraqi security forces claimed victory in the weeks-long battle for the Anbar provincial capital of Ramadi from IS forces. 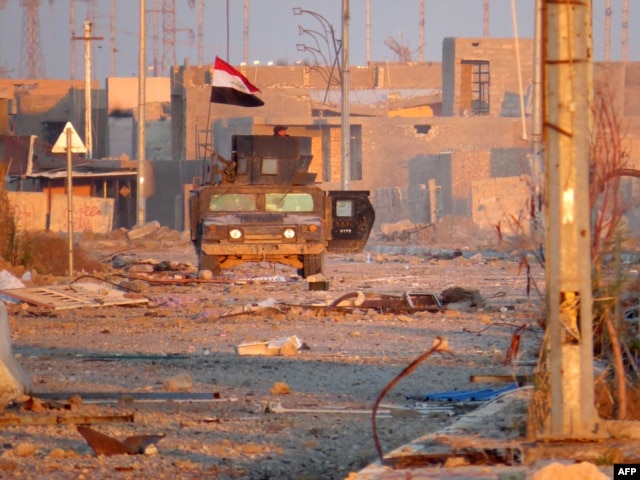 A member of Iraq’s counter-terrorism forces monitors his surrounding in a street in Ramadi’s Dhubbat neighberhood, adjacent to Hoz neighbourhood, Dec. 25, 2015.

In the wake of the November 13 Paris attacks and the mass shooting in San Bernardino, California on December 2, King is calling for heightened surveillance of Muslim communities, including mosques, in the U.S. He was asked about the expected outcry that such increased scrutiny would violate the constitutional rights of U.S. citizens.

King blames Muslim clerics for often failing to inform law enforcement about threats of violence made in mosques. He cited the case of one of the Tsarnaev brothers, who he said was put out of a mosque after making violent statements before the Boston Marathon bombings. Those bombs set off in April 2013 killed three and wounded more than 240. 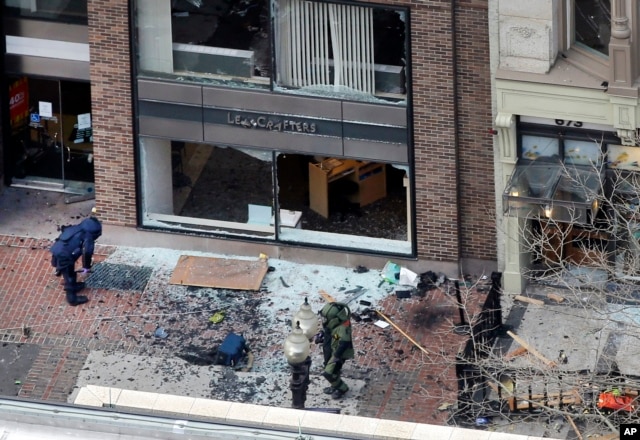 FILE – One of the blast sites on Boylston Street near the finish line of the 2013 Boston Marathon is investigated by two people in protective suits in the wake of two blasts, April 15, 2013.

King said the same is true in the case of young Muslims who make statements in mosques before joining terrorist groups overseas.

“On Long Island here, we’ve had people in mosques who’ve spoken radically, who spoke of their intentions to be involved in jihad.  It was never told the police, never told to the police at all.  And, when you talk to police off the record, they will tell you they get very little cooperation from within the leaders of the Muslim community,” said King.

King said law enforcement, who in the past has successfully infiltrated the Italian-American and Irish-American communities to stop violent activities, must be allowed to do the same in the Muslim community. He said law enforcement now is limited by what it can do to monitor mosques, but adds it has to be done.