At least 74 people are still missing after Sunday’s massive landslide in southern China that buried scores of buildings under up to 10 meters of mud and construction debris.

So far two people have been confirmed killed, but on Wednesday morning rescuers found a survivor who had managed to stay alive for some 67 hours.

The 21-year-old man is Tian Zeming, a migrant worker from Chongqing. It took rescuers at the site in Shenzhen more than three hours to pull Tian out from the avalanche of debris. Doctors say he suffered multiple fractures and soft tissue injuries, but his condition has stabilized after a three-hour surgery. 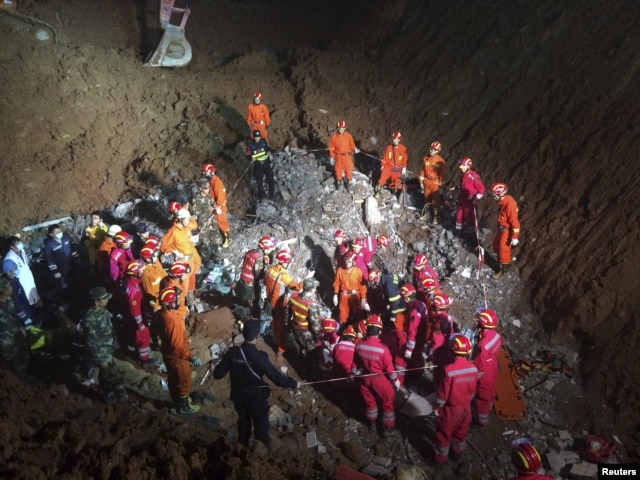 Rescuers surround the area where they found a 19-year-old survivor under a collapsed building at the site of a landslide which hit an industrial park on Sunday, in Shenzhen, Guangdong province, Dec. 23, 2015.

Many more may not have Tian’s luck as thousands of rescuers have found few signs of life in the disaster site that is the size of 53 football pitches.

Rescuers had previously said signs of life were detected in four spots. Tian and a surviving dog were found at two spots and leaking water at another, which has left them one last spot to search.

“We are still digging at one spot. But the signals, [indicating] signs of life, have apparently weakened and almost vanished. But we’re still digging, dismantling and continuing our search there,” Wang Guoshe, director of the province’s regiment of fire protection, told a media briefing on Wednesday morning.

The slow progress in finding survivors has also invited criticism online, which Chinese authorities continue to censor as the catastrophe remains as the second top-trending topic on the Freeweibo.com. Rescuers look for survivors after a landslide hit an industrial park in Shenzhen, south China’s Guangdong province on Dec. 20, 2015.

One user’s censored post read, “The whole country is in shock. Given the frequency of man-made disasters [in past months] including Tianjin blasts and the sunk Oriental Star cruise ship…should only local governments be held responsible?” Another user wrote, “we’ve sacrificed many other people’s lives so as to improve the maturity of our civil society.”

Authorities are working to try to reassure the public that they are finding those responsible for the landslide. The wave of earth that crushed buildings at the industrial park began at an abandoned quarry that has been used for years as a dump site for construction materials.

Authorities said that they have arrested 12 company employees and 11 government officials, all accused of negligence in managing the dump site.

Local media reports named Yixinglong Investment & Development a suspect because it managed the dump site as a subcontractor. Media reports say the contract stipulated that the company Yixinglong took full responsibility for the site’s safety measures.

But a labor activist in Hong Kong said the local authorities should not escape any responsibility for the site.

“The supervising body and the other superior board should be held responsible as well,” said Apo Leong, a consultant of Asia Monitor Resource Center, which promotes the region’s labor movements.

“You just cannot outsource everything and turn a blind eye to what happens afterwards. That’s why I say the local government should also be held responsible for this incident,” he added. 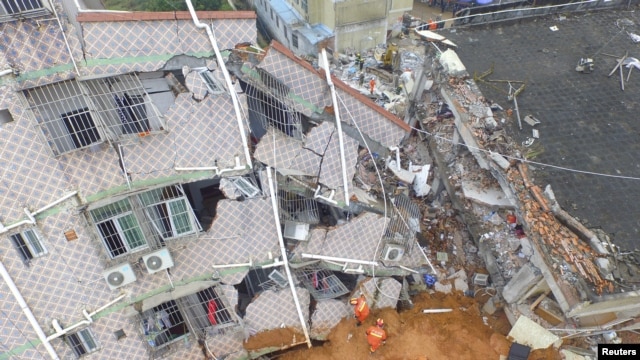 An aerial view shows rescuers looking for survivors at a damaged building after a landslide hit an industrial park in Shenzhen, Guangdong province, China, Dec. 21, 2015.

For some, the disaster is an outcome of the challenges faced by the city’s construction waste management, following three decades of rapid economic growth.

The Shenzhen Evening News, published by the city government, had warned in October last year that the city might be soon face a shortage of dump sites for construction waste because of the boom in construction projects.

The report cited an anonymous government official as saying that his “only” worry was it has become “extremely difficult” to find locations for the disposal of waste.

According to the official Xinhua news service, Xing Feng, a civil engineering professor from Shenzhen University, had previously cautioned that China’s quantity of construction debris has grown rapidly in the past two decades, averaging at one ton per person, with the country’s disposal management mechanism lagging far behind.