SEOUL—A human rights organization in Seoul that has been documenting the harsh conditions imposed on North Korean migrant laborers appealed Wednesday to host countries to intervene to protect the worker’s rights.The Database Center for North Korean Human Rights (NKDB) says more than 50,000 North Korean workers are sent overseas to about 20 nations, including China, Russia, Mongolia, Malaysia, as well as countries in the Middle East and Africa.

NKDB researchers have documented systematic abuse suffered by North Korean migrant laborers, who are being forced to work 12-hour days. Most are in construction, agriculture, manufacturing and other physically demanding and at times dangerous jobs.  Many also live in crowded, unsanitary conditions in segregated compounds, where they are under constant surveillance and their movements are restricted.

“According to our research we found that these workers and laborers are working and living essentially in a North Korean society outside of the North Korean state,” said Yoon Yeo-sang, the director of NKDB’s North Korean human rights archives. 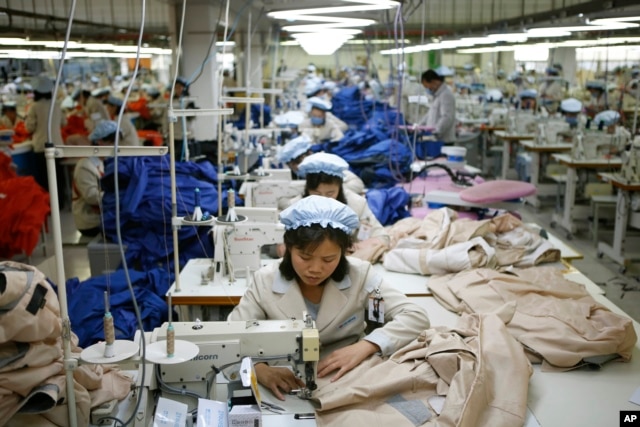 The North Korean migrant worker program earns $200-300 million a year in foreign currency, most of which goes to the state.  The human rights group says workers receive between $50 to $100 a month, which is about 10 percent of their monthly salaries.

Despite the low pay and poor conditions these overseas jobs are highly sought after in North Korea where poverty is widespread.  Most applicants must also pay the state a fee of $600 or more to enter the migrant labor program.

NKDB says that North Korea seeks out countries for its migrant labor program that do not have a strong commitment to human rights or strong labor laws.

The group has focused recently on investigating migrant labor conditions in Mongolia and Poland, two countries that use large numbers of North Korean workers.

In these countries they saw little oversight from the host governments and a lack of accountability from the companies that employed the North Korean workers as subcontractors. In many cases they found that the workers did not even get the percentage of their wages they were due.

“They were working between the blurred boundaries of legal and illegal systems and because of their precarious status many of them were not paid,” said NKBD’s Yoon Yeo-sang.

United Nations efforts to improve human rights conditions inside North Korea have so far not been successful.

Last year the U.N. General Assembly voted to refer North Korea to the International Criminal Court based on a U.N. Commission of Inquiry report that documented a network of political prisons in the country and widespread human violations that include torture, enslavement, rape and murder.  That resolution has been held up in the Security Council by North Korea’s allies, Russia and China.

These human rights activists still call upon North Korea to improve its labor practices but they also want to bring legal action or unwanted media attention to the host countries and companies that allow migrant labor violations to take place.

North Korea is not a signatory to the International Labor Organization that lays out worker rights and protections. But most of the countries that host its workers are signatories.

“Because not doing anything is also a violation. It is a violation by omission,” Chenti said.

These human rights activists are calling for the establishment of human rights commissions in countries that don’t have one, like Mongolia; stronger enforcement of labor laws; creating migrant worker assistance centers; and measures to fairly resolve wage disputes in host countries.

Youmi Kim in Seoul contributed to this report.