WASHINGTON—Republican presidential contenders will gather Wednesday at the Ronald Reagan Presidential Library in California for their second nationally televised debate. A total of 11 candidates will be on stage this time, including the current frontrunner, real estate mogul Donald Trump.Trump once again will be the center of attention as he was in the first debate last month in Cleveland; but Trump is expecting plenty of barbs headed his way from Republican rivals intent on seeking to share the spotlight in what has become an unpredictable and heated contest for the party’s presidential nomination.

“I’ll be attacked.  I guess I’m going into a lion’s den,” Trump told reporters this past weekend on the campaign trail in Iowa. “Somebody will attack, somebody like a Rand Paul who is down at 2 percent [in the polls] … It certainly seems to be unlucky to attack me.”

Trump has expanded his lead in public opinion polls since the first debate last month. A new poll shows him with 40 percent support in New Hampshire with fellow newcomer Ben Carson a distant second.

Trump also has shown no hesitation in striking back at those who dare to attack him, including South Carolina Senator Lindsey Graham and former Florida Governor Jeb Bush. 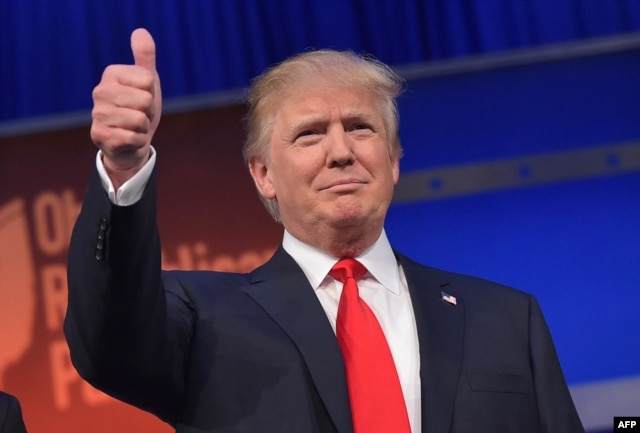 Real estate tycoon Donald Trump flashes the thumbs-up as he arrives on stage for the start of the prime time Republican presidential debate on Aug. 6, 2015 at the Quicken Loans Arena in Cleveland, Ohio.

As Trump’s lead in the polls grows, so apparently does his confidence. During a rally last week in front of the U.S. Capitol featuring opponents of the Iran nuclear deal, Trump continued his habit of making bold promises.

Republican National Committee Chairman Reince Priebus told CNN’s “State of the Union” to expect “more elbows” to be thrown in the second debate, especially from Republican contenders who have sunk in the polls compared to Trump and Carson.

This second debate also will feature the only woman in the Republican field, former technology executive Carly Fiorina. Fiorina has been the target of Trump barbs for months now and she recently fired back that she considers Trump “an entertainer.”

Bush has stepped up his criticism of Trump, while Senator Rand Paul of Kentucky told The Associated Press that someone has to “bring him down.” Paul added that he was not going to “sit quietly by” and let “the disaster that is Donald Trump become the nominee.”

Bush also has been pushing a new blueprint for the economy focused on spurring economic growth.

“My plan for the entire economy will create a true revival of the private sector and 19 million new jobs,” Bush told supporters recently in Nevada. Bush has slipped in polling in the key early states of Iowa and New Hampshire, however, and some of his supporters are urging him to take on Trump more directly in the second debate.

Among those rivals taking a pass on going after Trump was Ohio Governor John Kasich, who is building momentum in New Hampshire in recent polls. Kasich told “Fox News Sunday” he would take the time to introduce himself to voters who don’t know much about him. 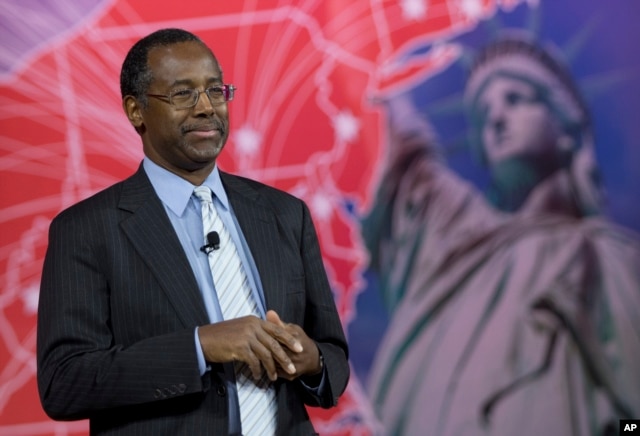 The surge in support for Trump, Carson and, to a lesser extent Fiorina, suggests there is a strong desire at the moment for political outsiders among Republican primary voters.

Carson’s quiet, even-tempered approach is in particular contrast to Trump’s edgy, aggressive campaign. Carson, a political novice, continues to do well with Republicans looking for an alternative. “If I listened to all the people throughout my life who said this has never been done before, this cannot be done, I wouldn’t be talking to you today,” Carson told supporters in California.

Among those hoping to grab a share of the limelight in the second debate is Texas Senator Ted Cruz, who has been very complimentary and deferential to Trump in the race so far.  Cruz invited Trump to attend last week’s rally at the Capitol opposing the Iran nuclear deal.  “This Iranian nuclear deal is catastrophic.  It is the single greatest security threat facing America,” Cruz told those at the rally before giving way to Trump. 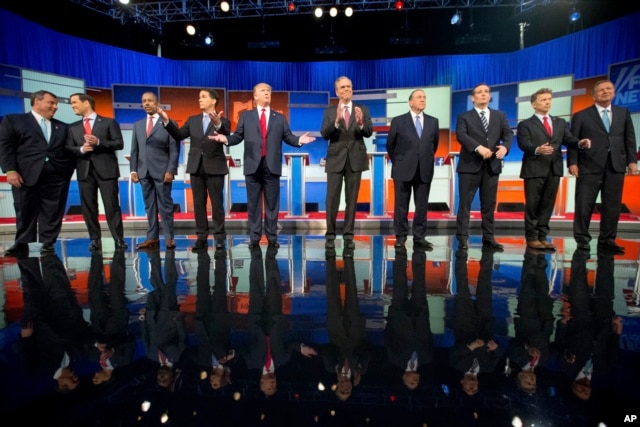 Targeting Trump, not his supporters

In the second debate, Trump’s rivals will be looking for ways to attack him without alienating his supporters, said analyst Stuart Rothenberg.

“We are at the point now where voters simply want to express frustration and disappointment and anger with the direction of the country, and Republican voters [expressing] frustration with the president. And so they are looking for someone who gives them voice and Donald Trump certainly does that,” said Rothenberg.

The debates also provide the Republican candidates an opportunity to connect with voters, although so far Trump seems to have done better than any of his rivals in that area.

The interplay among the contenders in the second debate will also be crucial.

“Thinking on their feet is going to be an interesting moment because right now they are still pretty much just mouthing talking points and staying in their individual campaign bubbles,” said Republican analyst Scot Faulkner.

The Democratic contenders, including embattled frontrunner Hillary Clinton, won’t hold their first debate until October 13, by which time we may know whether Vice President Joe Biden will enter the race.