ÖSZKE, HUNGARY—Serbia says it is not able to handle the vast number of migrants gathered on its sealed border with Hungary, after Hungarian officials closed the gap in its fence with Serbia as part of a crackdown on the migrants.

Foreign Minister Ivica Dacic said on Tuesday that Serbia is not a “collection center.” He said it is unacceptable for migrants to have to return to Serbia while at the same time more were arriving from Greece and Macedonia.

Earlier Tuesday, Hungarian officials closed two official border crossings due to what they said were inadequate controls on the Serbian side.  Hungary also declared a state of emergency in two southern counties as part of a crackdown on migrants trying to reach the European Union.

Hungarian Prime Minister Viktor Orban said under new security measures that went into effect Tuesday, his administration will be tough on those who cross the border illegally. 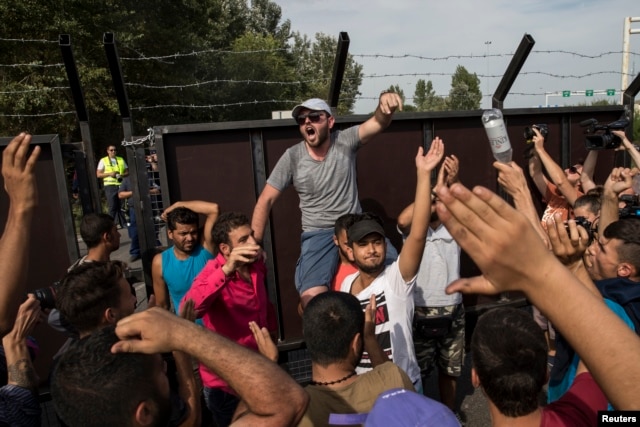 Migrants shout to open the border near the village of Horgos, Serbia, Sept. 15, 2015.

On Tuesday, hundreds of migrants pressed against the new barrier and demanded they be allowed to cross the border.  They chanted, “Open border, open border!” while police stood on the other side.

Local volunteers handing out food and supplies said about 200 people crossed through there Monday.

Monday evening, the tents the volunteers had set up near the fence which, until a few days ago, were full of migrants resting after a long journey, were completely empty.

Only a kilometer or so away, at the legal crossing point from Serbia into Hungary, police had set up a barrier to keep journalists or volunteers away while the migrants arriving at the border were being whisked away in buses to the Röszke train station.

At the station, people sat for hours, either in buses, or by the side of the tracks, waiting for the next train to arrive.  Tired, sleepless children wailed as volunteers distributed food and water.

There seemed to be a lot of confusion, largely resulting from the inability to communicate. Most of the migrants did not speak Hungarian and the police guiding them through gestures and occasional English words did not know Arabic.

However, some migrants who spoke English had been told the train would take them to the Hungarian border village of Hegyeshalom, where they could walk over into Austria and take a bus or a train to Vienna.

A record 9,380 people entered Hungary Monday, Hungarian officials said. Hundreds more spent the night on the Serbian side, waiting for the crossing to open.

Hungarian officials said Tuesday they also have closed two official border crossings due to what they said were inadequate controls on the Serbian side.

Hungarian Prime Minister Viktor Orban has announced that under new security measures that went into effect Tuesday his administration will be tough on those who cross the border illegally.

Officials announced Tuesday police have detained at least 60 people under the new law, which could see illegal border crossings punished by up to three years in jail.

The law took effect a day after European interior ministers failed to agree on a plan to relocate 120,000 migrants across the European Union.

While a majority of the ministers support the plan for binding quotas, many of the objections came from Eastern European nations, including Hungary and Slovakia. Their borders are among the first stops for migrants trying to get to Western Europe.

The ministers did agree on an earlier plan to relocate 40,000 migrants now in Greece and Italy.

Some European leaders blame Germany for openly welcoming migrants to the continent trying to flee war and terror in Syria and elsewhere. Germany has become increasingly frustrated with some EU members who are reluctant to share the burden.

More than 430,000 migrants seeking a better life, including refugees from Syria and Iraq, have crossed into Europe this year. Migration watchers say nearly 3,000 have died trying.

The International Organization for Migration (IOM) warns more migrants and refugees will die as a direct result of the European Union’s inability to make a decision on how to tackle the crisis sweeping Europe.

September has been a deadly month for migrants.  Just over the past few days, the IOM estimates 72 migrants have lost their lives trying cross into the Greek islands from Turkey.

And, it says data received from the Turkish Coast Guard show some 13 migrants already have died in Turkish waters through the beginning of September.  IOM spokesman Leonard Doyle says this makes September the deadliest month on that stretch of the Mediterranean in two years and that the situation will only worsen.

“As the seasons turn and as the weather gets colder and as the dangers increase, we fear that the lack of decisions —  that the indecisions in Europe will lead to more deaths in the Aegean,” he said.

The IOM set up a national toll free “157 Helpline” in Turkey in 2005 to assist in the rescue of trafficking victims who are smuggled across the Mediterranean and Aegean Seas in flimsy boats.  Leonard Doyle says this hotline today acts as a lifeline for many.

The U.N. refugee agency says it believes the crisis is manageable if European countries cooperate on finding a solution, adding the consequences of indecision are dire.  It says refugees and migrants will suffer and be stuck in legal limbo as they are shunted from one country to another.  It says Europe also will suffer.

William Gallo and Mike Richman contributed to this report from WashingtonLisa Schlein contributed from IOM headquarters in Geneva.