Bush Returns to New Orleans for 10th Anniversary of Katrina

Former U.S. president George W. Bush returned Friday to New Orleans – the scene of one of his presidency’s larger challenges – to tout the region’s recovery from the costliest natural disaster in U.S. history on the 10th anniversary of Hurricane Katrina.

Bush visited Warren Easton Charter High School, the same school he visited on the first anniversary of the catastrophic storm. He was accompanied by his wife, Laura, whose library foundation helped rebuild what is the oldest public school in New Orleans.

The two met with students at the school’s gymnasium, where he was also greeted by New Orleans Mayor Mitch Landrieu and former Louisiana governor Kathleen Blanco, who was in office during Katrina.

Bush addressed a packed crowd at Easton, quoting a local teacher who told him, ‘We teach our kids to be resilient.’

“It’s the same resilience this city has shown the world over the last 10 years. Its best days lie ahead,” said Bush, who was president in 2005 when Hurricane Katrina broke through protective levies and flooded the city, killing 1,800 people and destroying 100,000 homes.

His administration was roundly criticized in the days following the storm for a slow emergency response to the thousands of people needing shelter, supplies and security amid the flooding.

On Saturday, former U.S. president Bill Clinton is scheduled to appear at a ceremony marking the anniversary of Katrina’s landfall in New Orleans. The ceremony will also feature Mayor Landrieu and local cultural and religious leaders.

“You are an example of what is possible when, in the face of tragedy and in the face of hardship, good people come together to lend a hand,” he told hundreds of residents gathered at a new community center in the Lower Ninth Ward, which was devastated by the storm. “And brick by brick, block by block, neighborhood by neighborhood, you build a better future.” 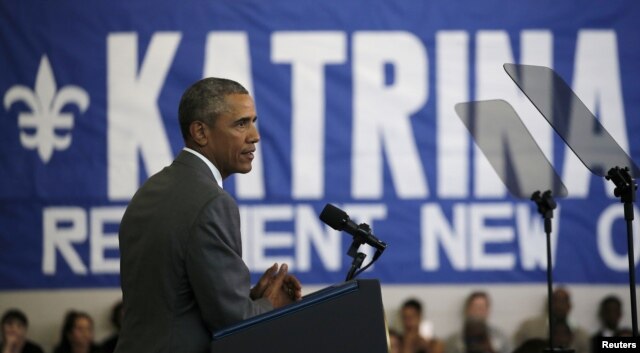 “The project of rebuilding here wasn’t simply to restore the city as it had been, it was to build a city as it should be,” he told the crowd of 600. “A city where everyone, no matter who they are or what they look like or how much money they’ve got, has an opportunity to make it.”

The president opened his remarks by noting the fast, steady and strong recovery of the U.S. economy.

Obama said despite weeks of volatility in global stock markets, “the United States of America, for all the challenges we still have, we continue to have the best cards — we just have to play them right.”

The storm that slammed into New Orleans on August 29, 2005, broke through protective levies and left more than 80 percent of the city under water.

Torrential rains and winds up to 280 kilometers an hour raked the city near the Gulf of Mexico.

“The world watched in horror as we saw those rising waters drown the iconic streets of New Orleans, families stranded on rooftops, bodies on the streets, children crying, crowded in the Super Dome,”. Obama said. 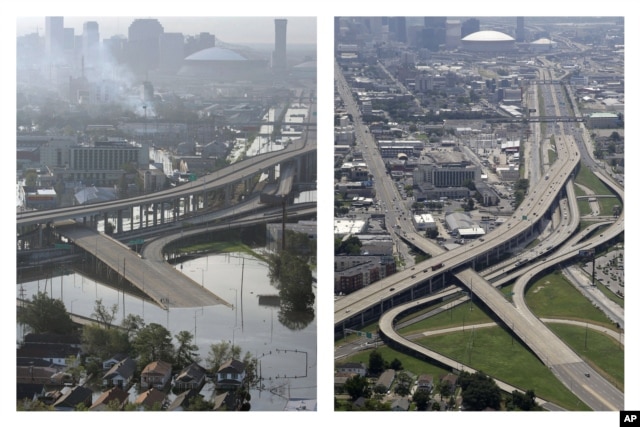 This combination of Aug. 30, 2005, and July 29, 2015, photos shows downtown New Orleans floolded by Hurricane Katrina and the same area a decade later.

Katrina caused more than $135 billion in damage, making it the costliest natural disaster ever in the United States.

“What started out as a natural disaster became a man-made disaster, a failure of government to look out for its own citizens,” the president noted.

Much of the U.S. Gulf Coast was heavily damaged by the storm, resulting in billions of dollars in federal assistance spent to help coastal communities rebuild.

Obama, on his 10th visit to the coastal city, called New Orleans’ recovery a model for the nation in urban innovation and disaster response and resilience. More than $14 billion has been spent to reinforce levees.

“We are going to see more extreme weather events as the result of climate change, deeper droughts, deadlier wildfires, stronger storms,” he said. “That’s why, in in addition to things like new and better levies, we have also been investing in restoring wetlands and other natural systems that are just as critical for storm protection.”

Prior to his speech Thursday, Obama and New Orleans Mayor Landrieu walked through the historic African-American neighborhood of Treme, home to jazz legends.

Treme was flooded during Katrina, with many areas submerged by several meters of water. Many residents fled after the storm and never came back. Others have moved into new mixed-income housing constructed on the sites of former public housing projects. 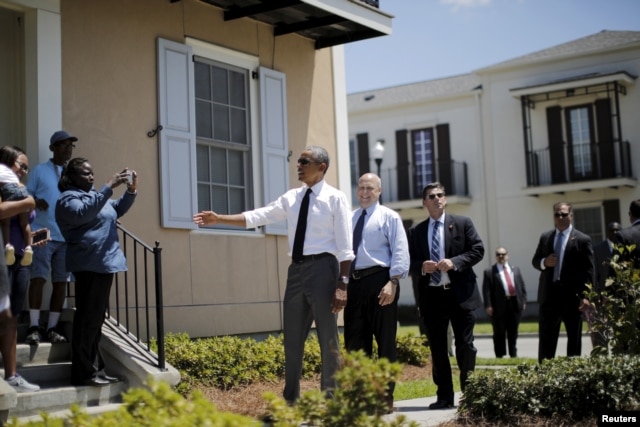 U.S. President Barack Obama, with New Orleans Mayor Mitch Landrieu at his back, chats with city residents in an area reconstructed after Hurricane Katrina, Aug. 27, 2015.

On a stroll Thursday, Obama met with several residents who waited outside their newly constructed homes. He later spoke to reporters about the community’s revitalization.

“Part of our goal has always been to make sure not just that we recover from this storm, but also that we start dealing with some of the structural inequities that existed long before the storm happened.”

Obama pointed out that just because the residents have nice housing does not mean the job is done. He noted the need to combat poverty, income inequality and a lack of affordable housing, particularly in the African-American community.