British Prime Minister David Cameron has refused to confirm the identity of “Jihadi John,” the Islamic State militant who has been identified in news reports as a computer programmer from West London.

Cameron said he could not comment on any specific cases, but insisted Britain is doing all it can to deal with security threats, when asked Friday if he would confirm the militant was in fact the Kuwait-born Mohammed Emwazi.

“When there are people anywhere in the world who commit appalling and heinous crimes against British citizens, we will do everything we can – with the police, with the security services, with all that we have at our disposal – to find these people and put them out of action. That is the number one priority for me,” Cameron said from Wales. 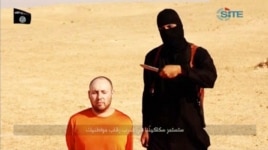 FILE – A masked, black-clad militant, identified by The Washington Post newspaper as a Briton named Mohammed Emwazi, stands next to a man purported to be Steven Sotloff in this still image from a video obtained from SITE Intel Group website, Feb. 26, 2015.

U.S. intelligence officials on Thursday confirmed that the man who had appeared in several videos of hostage beheadings was, indeed, Emwazi.

A senior British security official told The New York Times Emwazi had been identified “some time ago,” but London had not disclosed his name for security reasons.

Media reports quote friends of Emwazi as saying they also believe he is the tall, London-accented speaker who appeared in the gruesome Islamic State videos.

But VOA’s Jamie Dettmer, in Rome, says European intelligence sources refused to confirm the identification, saying “the story is more complicated than that.”

The militant commonly known as Jihadi John has appeared in at least five Islamic State beheading videos, clad in black, with a mask over his face and a holster under his arm.

Friends and acquaintances say they believe Emwazi began to radicalize in the past few years after trips to Africa and the Middle East. He is reported to have been previously monitored by British authorities.

The widow of one of those killed in the videos, British aid worker Dragana Haines, has told reporters she hopes Emwazi is captured alive so that he can be put on trial and serve as “lesson” to others.