SITE: IS Says US Hostage Killed in Jordanian Strike

The White House said it could not confirm the claim.

“We are obviously deeply concerned by these reports,” said Bernadette Meehan, spokeswoman for the White House National Security Council, in a statement. “We have not at this time seen any evidence that corroborates ISIL’s claim.”

U.S. State Department spokeswoman Marie Harf said the State Department has acknowledged there are Americans being held overseas, including by the Islamic State, but said she could not get into any further details about this specific case.

Jordan has been carrying out airstrikes against Islamic State targets following the group’s murder of a Jordanian pilot who was captured in Syria in December.

The American aid worker, believed to be the last U.S. hostage held by the militants, was thought to be alive as recently as two weeks ago, according to intelligence sources.

The claim that she was killed in an airstrike was greeted with some skepticism, after Jordanian authorities said their pilot was killed a month before IS released a video showing his death. 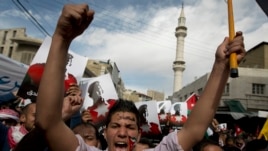 In Jordan’s capital, Amman, Friday, thousands of people flooded the streets in support of the Jordanian military pilot murdered by Islamic State militants.

The demonstrators marched through the city after Friday prayers at the al-Husseini mosque, waving Jordanian flags and chanting slogans against the Islamic State group.

Jordan says recent airstrikes against Islamic State targets are only the beginning of its retaliation.

“The Jordan army’s response to ISIS [Islamic State militants] and what they have done to Muath and all of the other innocent people is totally justified,” said a doctor in Amman [Dr. Ayman Khamoudeh] taking part in Friday’s protests. “If no one puts a struggle against them and fights them, who else will fight them?”

Jordanian warplanes launched dozens of airstrikes against the Islamic State group in Syria and Iraq Thursday after King Abdullah vowed an “earth-shaking” response to the killing.

A slickly produced Islamic State video emerged this week, showing the pilot, locked in a cage, doused with fuel and burned alive.

King Abdullah visited Kaseasbeh’s family at their home Thursday. He said Jordan will continue the fight to defend its people and religion.

Foreign Minister Nasser Judeh told CNN television late Thursday that Jordan will go after Islamic State militants “wherever they are, with everything we have.”

“We’re going to go after them and we will eradicate them,” said Judeh, who referred to Islamic State fighters as “cowards.”

U.S. Defense Department officials said Thursday the Pentagon has moved aircraft and pilots to northern Iraq to better position themselves in search and rescue missions in Iraq and Syria. Some of the assets were moved from Kuwait.

The United Arab Emirates suspended its participation in the U.S.-led airstrikes on Islamic State after the Jordanian pilot was captured. It called on the U.S. to be better prepared to rescue coalition pilots captured by Islamic State.

Also Thursday, a leader of Kurdish Peshmerga fighters told VOA his ground forces are in need of military assistance in their fight against Islamic State

“NATO and the United States should understand that we need political and military assistance,” said commander Wasta Rasul. “I ask formally that their ground forces participate in the war with us, and why should the Kurds do it alone as we fight on behalf of the world.”