A menacing river of molten lava that bubbled over a road and overran a cemetery on its way towards a village on Hawaii’s Big Island crossed onto a residential property on Tuesday and threatened to consume its first home, officials said.

The slow-moving lava from the erupting Kilauea volcano has been advancing on the town of Pahoa for weeks, with officials warning it is hot enough to incinerate any homes, roads and businesses in its path. 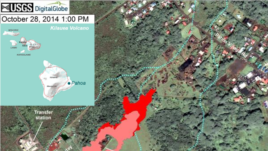 Molten lava is hotter than 1,650 degrees Fahrenheit (900 Celsius), according to the U.S. Geological Survey.

Residents of about 50 homes in the projected path of the lava, whose glowing leading edge is about 80 yards (meters) wide, have been urged to prepare to leave, and many have slowly emptied their houses of prized possessions.

“People have their life savings in their properties here. They face losing it all,” said Mike Metcalf, whose Pahoa Auto Parts business could be in the path of the lava flow, although his home is in the clear.

The lava began bubbling out of the Kilauea volcano on June 27 and initially menaced a smaller community before turning toward Pahoa. It came to a standstill in September before resuming its meandering trudge several weeks ago.

With its hardened top layer extending like a darkened river up the volcano’s slope, the lava flow has devoured grass and trees and sometimes triggered methane explosions.

A plume of black smoke hung near the town on Tuesday, hours after the lava crossed onto its first residential property during the night, officials said.

The front appeared to bypass a house even as it incinerated an uninhabited building, but a finger of lava later made a break for the evacuated home and could soon destroy it, said Darryl Oliveira, director of Hawaii County Civil Defense.

Authorities were set to go door-to-door at several homes and businesses nearest the lava flow to urge anyone there to leave before nightfall, he told reporters.

There have been no reports of looting, but plans were in place to bring in National Guard members to provide security.

Authorities will not force residents to stay away from their land if lava overruns it, and some homeowners might be allowed to watch the destruction unfold. Some people have taken helicopter tours to watch the slow-moving disaster from above.

“Entire families have been raised in these homes. It’s a very difficult thing for them to see this happening, and if we can accommodate them in any way for the grieving process, we will want to do that if it’s safe,” Oliveira said.

Some homeowners threatened by the lava have insurance, while an unknown number of others do not, he said.

The lava flow was advancing about 10 yards (meters) an hour toward Pahoa village, a historic former sugar plantation consisting of small shops and homes, with a population of about 800 people, whose businesses mostly lie south of the area in greatest danger.

Education officials said they would close an endangered elementary school on Wednesday and shutter four more schools on Thursday. Crews have been building temporary access roads and trying to protect Highway 130, a route traveled by as many as 10,000 cars a day.

The Kilauea volcano has erupted from its Pu’u O’o vent since 1983. The last Big Island home destroyed by lava was in Kalapana in 2012, and lava flows from the volcano destroyed more than 180 homes between 1983 and 1990.

“One lava flow coming through in a little spot is something you can survive, but if it continues to flow down this way for many years, then I don’t know what the future of our town will be,” he said in a phone interview.