President Barack Obama says the risk of a widespread Ebola outbreak in the United States is very very low, if all the proper protections are taken.

Speaking at a Cabinet meeting on Ebola Wednesday, Obama called for an emergency federal medical team to be immediately deployed to any hospital where an Ebola case is diagnosed, to ensure that those preventative steps are taken.

He stressed the need for a more robust global response to Ebola and more aid to the three countries that are at the epicenter of the outbreak — Guinea, Liberia and Sierra Leone.

The 15 members called Ebola a threat to world peace and security, and urged all U.N. members to “dramatically expand” providing resources to fight the disease. 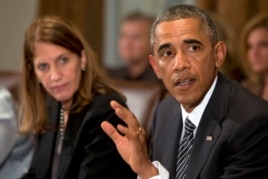 President Barack Obama, right, next to Health and Human Services Secretary Sylvia Burwell, speaks to the media about Ebola during a meeting in the Cabinet Room of the White House, Oct. 15, 2014.

Obama canceled his travel plans Wednesday for the emergency cabinet meeting after news that the second U.S. health worker infected with the Ebola virus took a flight within the United States a day before developing symptoms.

The U.S. Centers for Disease Control and Prevention said the health care worker, a nurse, Amber Vinson, 29, took a Frontier Airlines flight from Cleveland, Ohio to Dallas-Fort Worth, Texas airport on Monday.

CDC director Tom Frieden said Wednesday that a person being monitored for Ebola will not be allowed to travel on a commercial flight.

CDC officials have said there is “very low risk” to any of the passengers who were on the flight, as Ebola spreads by direct contact with infected body fluids, like vomit or blood, and not through the air, like flu.

Despite the low risk, the agency and the airline say they are reaching out to all 132 passengers who were aboard. Crew members said the health care worker did not show any symptoms on the flight.

Vinson contracted the virus at Texas Health Presbyterian Hospital while treating Thomas Eric Duncan, the Liberian national who became the first person in the United States to die of the virus last week.

Vinson’s news comes just days after another nurse from the same hospital, 26-year-old Nina Pham, became the first person infected by Ebola in the United States while caring for Duncan during much of his 11 days in the hospital. Duncan died on Oct. 8.

Pham released a statement Tuesday saying she is “doing well” and wants “to thank everyone for their kind wishes and prayers.”

The CDC also said Vinson is being moved to Emory University Hospital in Atlanta, Georgia, on Wednesday for treatment.

Emory is one of the country’s hospitals that is equipped to handle Ebola patients. Two American missionaries infected with Ebola were successfully treated at Emory in August after being flown from Liberia in isolation bubbles.

“Health officials have interviewed the latest patient to quickly identify any contacts or potential exposures, and those people will be monitored,”the Texas Department of State Health Services said on Wednesday.

Rawlings said Vinson’s apartment, where she lived alone with no pets, is being decontaminated.

Meanwhile, the head of a national nurses union, RoseAnn DeMoro, said she had reports saying the hospital in Dallas lacked the proper protocols to deal with an Ebola patient.

DeMoro said a group of nurses from the hospital contacted her with complaints that Duncan’s case had not been handled safely.

The union said the nurses, who would not give their names for fear of retribution, complained that Duncan was not isolated for several hours once admitted to the hospital, that hazardous waste was allowed to accumulate inside the building, and that there was no mandated training for hospital workers on how to handle infected patients.

The nurses’ union said these complaints were conveyed to the CDC in Atlanta.

There was no immediate comment from the CDC, but officials have said they are committed to the safety of health care workers.

Dr. Tom Frieden said he has been hearing “loud and clear” from health care workers that they are worried about Ebola and do not feel prepared to take care of a patient with the disease.

Frieden said the CDC team currently on the ground in Dallas is making sure those caring for Pham do so “safely and effectively.”

He said putting “a more robust” infection control team in place when the first patient was diagnosed in Dallas might have prevented her from getting infected.

At least 75 other health care workers who might have come into contact with Duncan are being monitored for fever or other symptoms.

Another 48 people exposed to Duncan before he was hospitalized have passed the period of greatest risk, and Frieden said they are now unlikely to develop Ebola.