Rasmussen said what counts is what is happening on the ground in eastern Ukraine, where the West says Russian troops are fighting with separatists against the Ukrainian military, a charge Russia denies.

“We continue to call on Russia to pull back its troops from Ukrainian borders, stop the flow of weapons and fighters into Ukraine, stop the support for armed militants in Ukraine and engage in a constructive political process,” he said. “That would be a genuine effort to facilitate a political solution.

Ukrainian President Petro Poroshenko will meet with NATO leaders Thursday, and Rasmussen said the alliance will make a joint declaration on the crisis, and agree on what he called “concrete steps” to enhance their cooperation with Ukraine.

NATO is also planning to create a rapid reaction force to enhance its military presence in member states close to Russia, and to deter, and if necessary respond to, any Russian military moves in those areas.

The secretary-general said the NATO leaders will also discuss the rise of the Islamic State militant group in Iraq and Syria, but for now he said it is up to individual members what to do about it.

Rasmussen said NATO would seriously consider any request from the Iraqi government to resume a training mission that ended two years ago, but no request has been received.

He welcomed unilateral action by several allies, including the U.S. bombing of Islamic State forces and humanitarian aid drops by several countries.

The NATO leaders will also confer about Afghanistan, where their combat mission will end in December and they hope to launch an advisory and training mission next year.  They are waiting for the results of the disputed Afghan presidential election to get the agreement signed.

Rasmussen described this as a “crucial summit at a crucial time,” and one of the most important in the alliance’s history. 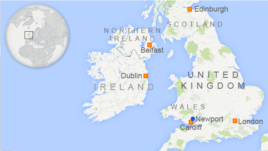 But experts say NATO finds itself frustratingly limited in what it can do to address what Rasmussen calls the “dramatically changed security environment.”

The alliance does not want to get into a major war, and many member countries face economic constraints and public skepticism, which have led to reduced defense spending.

At London’s Chatham House, Xenia Wickett says the leaders need to make strategic changes at this summit, and convince their people to come along.

That has been a perennial question for the alliance since the Cold War.  Now, it is being asked again in response to new threats, one of them from its old adversaries in Moscow.