The seizure of Novoazovsk, which sits astride a major highway leading from the Russian border through southern Ukraine to the Crimean peninsula, appeared to involve both separatists and Russian forces, indicating that Moscow was backing an outright invasion of Ukrainian territory.

With NATO asserting that roughly 1,000 Russian troops were operating inside eastern Ukraine and an offensive fighting force of at least 20,000 more poised on the border, the alliance scheduled an emergency meeting for Friday. A U.S. State Department official signaled possible new sanctions against Moscow.

“Columns of heavy artillery, huge loads of arms and regular Russian servicemen came to the territory of Ukraine from Russia through the uncontrolled border area to save [rebels],” Ukrainian President Petro Poroshenko told an emergency meeting of his security council.

The events prompted Poroshenko to cancel a visit to Turkey — just two days after he and Russian President Vladimir Putin met in Belarus for negotiations to end the five-month rebellion.

“We have noticed the launch of this informational ‘canard’ and are obliged to disappoint its overseas authors and their few apologists in Russia,” a ministry official, Maj. Gen. Igor Konashenkov, was quoted as telling the Interfax news agency. “The information contained in this material bears no relation to reality.”

At a White House press briefing, President Obama refrained from calling Russian actions an invasion, and he made clear that the U.S. was not planning military action against Russia.

“I consider the actions that we’ve seen in the last week a continuation of what’s been taking place for months now,” Obama said. “The separatists are backed, trained, armed, financed by Russia. Russia determined that it had to be a little more overt in what it had already been doing, but it’s not really a shift.”

“I think it is very important to recognize that a military solution to this problem is not going to be forthcoming,” he said.

At an emergency session U.N. Security Council Thursday, a top U.N. official said the world body could not verify the latest reports of a Russian invasion. However, Undersecretary-General of Political Affairs Jeffrey Feltman said the latest developments mark a “dangerous escalation in the conflict.”

Russia “has manipulated. It has obfuscated. It has outright lied,” she was quoted by news agencies as saying. 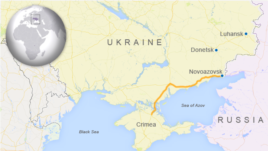 A senior NATO official told reporters that well over 1,000 Russian troops were now operating inside Ukraine.

“They are supporting separatists [and] fighting with them,” he said, speaking on condition of anonymity.

Western media have reported columns of heavy equipment, APCs and even tanks driving toward Novoazovsk, many without clear identifying marks. Given the geography of Ukraine’s southeast border and given that rebels were not known to possess heavy weaponry, all indications were that it came from Russia.

Officials in the rebel-held eastern city of Donetsk, to the north of Novoazovsk, said 15 civilians were killed in fighting Thursday.

More than 2,200 people have been killed in the conflict since it erupted in April following Russia’s blitzkrieg occupation and annexation of the Black Sea peninsula of Crimea.

“We are talking about several columns numbering tens of units of armored vehicles, that are confirmed to be the vehicles of the military forces of Russian Federation,” he told VOA.

The developments near Novoazovsk, which sits on the Sea of Azov, have raised concerns that Moscow wants to create a land link between Russia and Crimea, which Russia annexed in March. Currently, Russia’s only surface links with Crimea is via a creaky ferry service plying the Kerch Strait.

In Washington, State Department spokeswoman Jen Psaki suggested that the White House was considering harsher sanctions beyond those imposed over the past few months.

“`It is clear that Russia has not only stepped up its presence in eastern Ukraine and intervened directly with combat forces, armored vehicles, artillery, and surface-to-air systems, and is actively fighting Ukrainian forces as well as playing a direct supporting role to the separatists proxies and mercenaries,” Psaki told a media briefing.

“We have a range of tools at our disposal,” she said. Increased sanctions on Russia were “the most effective tool, the best tool.”

The sanctions imposed to date by Washington and European allies have cut off access to Western financial credit and some modern technology for oil and gas development, measures that have hurt Russia’s oil-dependent economy.

Putin may be satisfied with some sort of long-term influence in Ukraine, though that might be too much for Poroshenko, according to Nick Witney, a former British diplomat now at the European Council on Foreign Relations.

“The way out is, in the short term, a truce, a ceasefire, and ultimately some sort of political deal or understanding, which unfortunately will have to recognize that Russia does have more of an interest in Ukraine than we in the West do,” he said.

Xenia Wickett, a senior analyst at the London think-tank Chatham House, said the West is not likely to provide much help.

“NATO has actually kind of tripped over itself. By putting out very clear ‘red lines,’ it has actually got itself in a bind because Russia knows it can walk right up to those red lines but not cross them, without a NATO response,” she said